Posted by Dr. Suzie Abajian 0pc on February 12, 2017
This is a courtesy reminder that on Tuesday, February 14 (yes, that's Valentine's Day!) at 6:30PM there will be a Regular Board Meeting in the SPUSD Board Room at 1020 El Centro Street.
Resolution 2016-2017-20 In light of the rise across the country of xenophobia, racism and homophobia during and following the presidential election, I have been working on a resolution that will be presented to the board for a vote for us to show our commitment to all of our students, no matter what their race, religion, sexual orientation, national origin or immigration status may be. The resolution, if passed, will re-affirm our district's commitment in providing a safe, inclusive and supportive learning environment for all of our students. You can read the full text of proposed resolution here: http://southpasadena.agendaonline.net/public/Meeting/Attachments/DisplayAttachment.aspx?AttachmentID=533961&IsArchive=0

During the board meeting there will be presentations on the following:
Below, you can read some recent SPUSD NEWS: 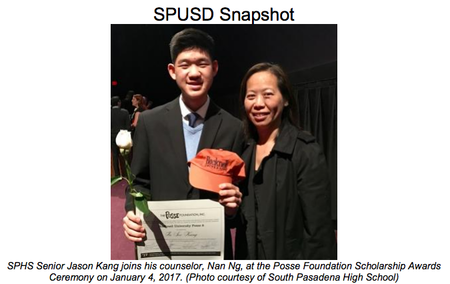 Feel free to contact me if you have any questions.